Now that school is out I have more time to post some of the things I haven't had time to do in the past.  The annual art show was held two weeks in May at the Sturgis Young Civic Auditorium.  I took pictures of each board and finally have the time put them into a video to share.  This is the result.

Posted by Unknown at 4:37 PM No comments:

This spring I learned that our ESL aide recently found out that her sister has cancer.  Many of us at Sturgis Middle School were very concerned.  Money was collected, pop was sold, and all of this really helped as the aide's sister lives in Texas.  I wanted to do something with my students that would be special, involve art, and teach a lesson about working for a larger, greater good.  I lost my sister, Colleen, to cancer and this touched me personally.

Over the past year, many people in Sturgis have become familiar with Lily, our school secretary's granddaughter and the 1000 Cranes for Lily Facebook page.  Many of us have followed her on Facebook and learned more about Fanconi Anemia as we have witnessed her struggles and triumphs.  Last year a friend of hers folded 1000 cranes for Lily and sold them at  a fund raiser.  Over spring break, I started folding cranes to see if maybe I could do some kind of project with my students.  I first had to figure out how I could teach it to all of my sixth through eighth grade students, regardless of ability.  Folding cranes, like anything else, gets easier once you fold one.  As you fold more, they become easier to do. Once I had my planning figured out, I came up with the idea to have the students make the cranes into mobiles.  Some students worked in groups but most worked on their own.  The goal was for each student to make at least 10 cranes for their project.  I sent out an email for broken jewelry and twigs. Our school interventionist brought me jewelry and one of my teacher friends supplied me with twigs.  I had some basket rings, some plastic light fixtures, as well as general junk that students used to develop their mobiles. Two eight grade girls told me they wanted to do something different.  I gave them a canvas and a very original project was born.  The cranes they used on the canvas had been made with paper some of my students had marbled. 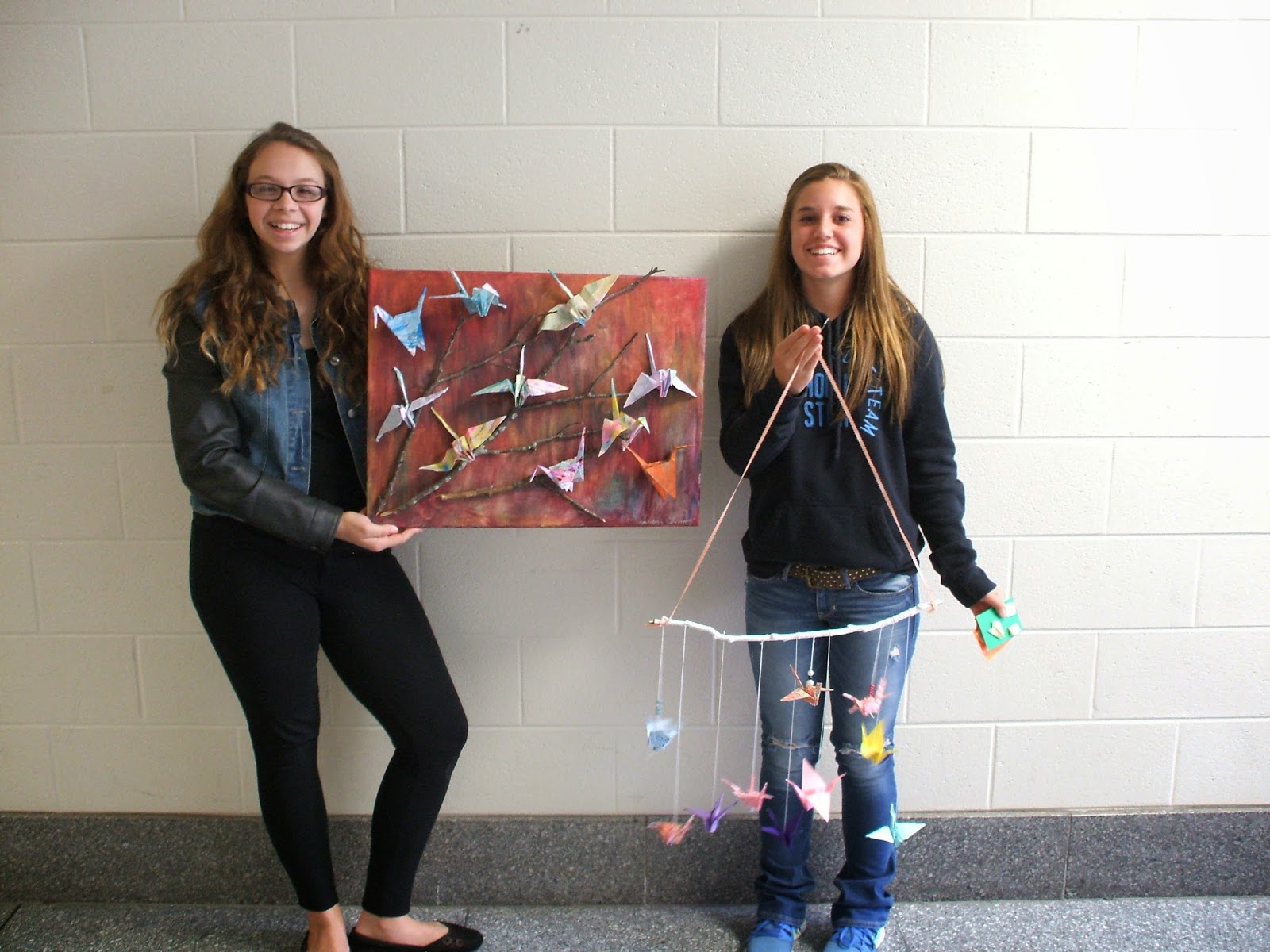 When this project was originally began in the spring, I was thinking of it as a general fund raiser for cancer awareness.  It became more personal when we found out there was a need in our own school.  It was at this point that I dedicated the project to our ESL aide's sister.  I talked with her and made sure she understood why we wanted to do this for her sister.  She is a very private person or I would share her name here.  Most people that know her will know who I am speaking about.  I know that she was touched and since all of this we have shared stories with each other about our sisters.  We raised a little over $400 for here sister.  We also gave her, her sister, and her mother each a crane mobile. This way they can think about each other whenever they look at their cranes.

When I set up the display I had each mobile numbered.  This way I could post which students created them.  These are the numbers you see on the ceiling next to each crane mobile.  The larger mobiles were made by groups of students.  The mobiles sold for fifty cents a crane or best bid.  Some of the larger crane mobiles were real bargains as they had many cranes on them.  I also posted the story about how the idea for the cranes came about.

As the cranes were put up on display, the space became magical.  I wondered if the students would leave them alone and for the most part they did.  We actually had the cranes up for a whole month with very feel problems.  We put them up on Friday, May 16th.  I told our school secretary that it would be nice if Lily could see them.  I knew she couldn't be around people, so she would have to come in when the building is empty on the weekend.  Lily came in and her mother took this awesome picture.  She is looking at a large branch full of cranes made by several girls in my advanced art class.  When they saw this picture, they were tickled to see her looking at their mobile! 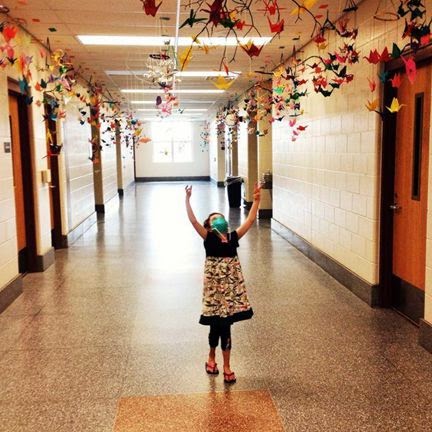 Finally, since school is out, I have had the time to put together a video showing the cranes.  I hope they can help spread some additional joy.  It was a magical time walking down this hallway for a good month.  I will never forget how beautiful the cranes looked and what a peaceful feeling I got every time I went out into the hallway.  I know other people felt the same.

Posted by Unknown at 4:27 PM No comments: